Ocean Craft Marine is among the very few companies which provide this training with every new boat delivery and does so free-of-charge. It is that important to us. 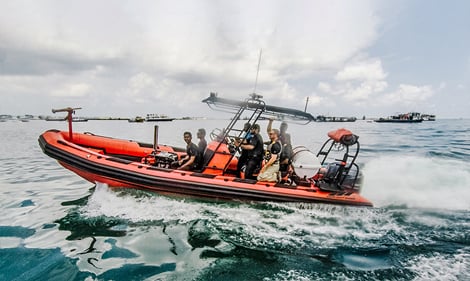 Over the years, Ocean Craft Marine has fully maturated our various training programs to provide the most comprehensive courses of instruction to ensure that all of our boat-operators fully-understand all the technical and maintenance aspects of their particular boat’s major sub-systems (e.g. engines, tube-set, seating, electronics, etc.) and that they receive both in-classroom and on-water operator training to ensure that they have all the necessary skill-sets to operate their new boats both efficiently and safely and to operate that boat to its maximum potential in any sea-conditions which they might encounter.

Our various training modules are individually tailored for each type of boat, the specific operational environment and the intended mission-profiles in which that boat is expected to engage and operate in, whether it is a law-enforcement boat or one of our many adventurous amphibious boats that is parked at your beach-house.

Our training modules include, but are not limited to:

Todd Salus, Ocean Craft Marine Vice President, leads and overseas the Ocean Craft Marine in-house training team and curriculum development. Todd is a retired Senior Patrol Leader and Combat Veteran of the United Sates Navy’s Coastal and Riverine Warfare Squadron Two-Five. He is a veteran of both Operation Enduring Freedom and Operation Iraqi Freedom, during which he planned and led well over 300 patrol-craft, combat-missions within the Central Command AOR, for which his unit was awarded the Navy Unit Commendation. Todd is the recipient of three awards of the Navy and Marine Corps Achievement Medal, two awards of the Armed Forces Expeditionary Medal, the Global War on Terrorism Expeditionary and Service Medals as well as many other personal awards.